By: Ananya Dondapati and Nona Saharan Tributes to Kobe and Gigi Bryant decorate the whiteboard in UDH. The drawings were originally started by Senior Marcus Sabian Santiago but other students have come forward and added their own contributions to the growing mural. Art by: Marcus Sabian Santiago (Kobe in black hat) and Ani  Two weeks after the private memorial service […]

By: Ananya Dondapati and Nona Saharan 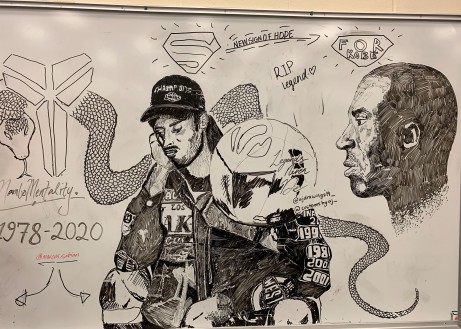 Two weeks after the private memorial service for Kobe Bryant and his daughter Gianna (Gigi), their legacies are still living strong- especially within the walls of High School North. Amidst the busy Upper Dining tables lies an almost 10-foot long whiteboard, which has since been covered in extraordinarily realistic portraits of the Bryants, first started by senior Marcus Sabian Santiago. The senior started this work late last month, taking time out of his study halls to draw parts of his piece until it was completely finished. “It’s so important that people have the opportunity in our school to express themselves. As long as it’s not vandalism, people should always be encouraged to leave their arts or ‘graffitis’ everywhere. The one thing that really connects the intricacies of our minds to others is art, whether drawn, sung, or anything else,” Santiago says about his artistic process. 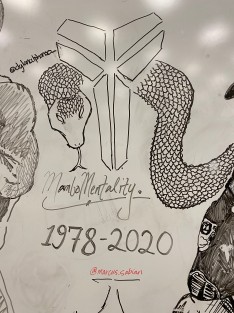 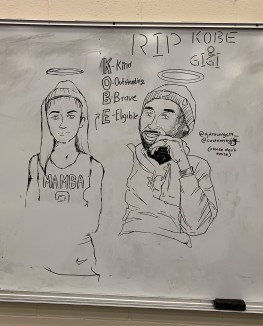 On the left, Alphonso’s tribute to Kobe Bryant. On the right, Ani’s tribute to both Kobe and Gigi. Art Credit: Dylan Alphonso (left) and Ani (right)

Following in his footsteps, many other talented artists of North displayed their own renditions of memorial, with works of Sabian Santiago lying among those of fellow classmate Dylan Alphonso and 14 year-old Ani (ajdrawings19_ on Instagram). The mural currently features different depictions of Kobe Bryant, including drawings of his famous photographs, Gigi as an angel, and different quotes and messages to tie it together. What makes it so unique is the different styles of art within every drawing- all on the same whiteboard, drawn with the same black marker, on display for all of North to see.

The mural not only serves as an outlet for students to express the loss they felt just this January, but also showcases the incredible level of potential many of these artists possess in portraying important themes towards the student body as a whole. For Sophomore Edward Li, it “highlights the importance of living life to the fullest and serves as a reminder for students to chase their dreams regardless of their stories.”

The whiteboard mural has been on display for roughly two weeks now, and features Sabian Santiago’s initial piece which is now accompanied by contributions from Alphonso and Ani. Art Credit: Ani (left), Alphonso (snake), and Sabian Santiago (right, Kobe with jersey and in black hat)

All in all, it seems that the spirits of Kobe and Gigi stay in remembrance among the students at High School North, continuing to act as role models for perseverance, kindness, and expression. “I feel a sense of pride to see so many people showing off not only their own feelings towards these traumatic deaths, but also their talent. I think it’s a great way to showcase the enormous amount of capability artists at North have that would otherwise go unnoticed,” says sophomore Isabella Cardinali about the importance of representation of the arts in schools.