From furry fingernails to dreadlocks made of yarn, the New York Fashion Week has consistently showcased innovative and unique designs at the forefront of fashion.  This year, however, there were two especially interesting and unique features: the first collection with hijabs, or traditional headscarves and the first model who is a victim of an acid attacks.

Designers and models alike have contributed to the ever-growing diversity on runways.  Indonesian designer Anniesa Hasibuan received a standing ovation for each of her models who wore the hijab, a rare occurrence at the NYFW.  At 30, Hasibuan is the first Indonesian designer to have her collection modeled on the NYFW runway.  Her incorporation of traditional Indonesian patt 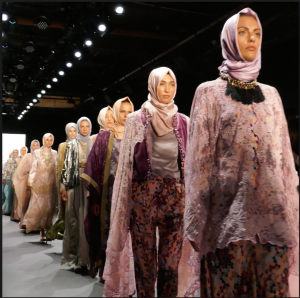 Models walk the New York Fashion Week 2016 runway wearing Hasibuan’s designs. This is the first time hijabs have been modeled on this platform.

erns and styles, including floral patterns, skirts, and silk, led fashion critics, such as Maha Syeda of the online magazine Muslim Girl, to applaud her unprecedented styles and modest fashion.

However, she still received critique from many conservative groups.  Dr. Eva Nisa of the Victoria University of Wellington, Australia, said that the purpose of the hijab was not to bring attention to the wearer, thus undermining Hasibuan’s efforts.

Despite these remarks, Hasibuan reveled in her praise and success.  On Instagram, Hasibuan writes, “I believe fashion is one of the outlets in which we can start that cultural shift in today’s society to normalize hijab in America so as to break down stereotypes and demystify misconceptions.”

Hasibuan has paved a new way for Muslim women: modest clothing with a fashionable twist.

Hasibuan’s designs have allowed the world to see Islam in a new light and show that traditional modesty and modernity can be one.  This one-of-a-kind collection also shows that Islam’s fashion exists outside of the black, plain burqa.

Later in New York Fashion Week, an exceptional model walked down the runway: Reshma Qureshi, an acid attack victim.  Qureshi, a nineteen year old woman from India, survived an acid attack while attempting to save her sister from her estranged abusive husband.  Her face was severely disfigured and she lost sight in one eye after her attackers covered her face with sulfuric acid two years ago.

However, earlier in September, Qureshi walked down the runway of New York Fashion Week wearing an elegant evening dress from one of India’s most prominent designers, Archana Kochhar.  Qureshi had never worn a dress after her attacks, feeling as though she was not beautiful enough.  But, on the runway she exuded confidence and strength.

Qureshi also works with many acid attack victims by creating makeup tutorials on YouTube to help boost others’ self-esteem and make them feel empowered.  She participated in the #TakeBeautyBack campaign, run by fashion production house FTL Moda, which was designed to help victims like herself.

As the runway of NYFW has been surrounded by controversy due to the lack of racial diversity and range of body types, this year’s show has presented an array of figures from  various backgrounds, allowing more women around the world to connect with both the models and designs.  Empowering these different groups, NYFW proves that fashion is more than just showcasing pretty clothes: it is bringing about a change in attitude one outfit at a time.