A look at the 2020 Grammys Red Carpet

And the worst dressed goes to… By: Ranjini Krishnan and Ananya Sathish Every year, the red carpet at the Grammy awards serves as a runway for celebrities to showcase their […]

And the worst dressed goes to…

By: Ranjini Krishnan and Ananya Sathish

Every year, the red carpet at the Grammy awards serves as a runway for celebrities to showcase their style. This year’s looks, however, were met with criticism and disappointment by many fans and members of the general public, and we’re here to confirm that we agree.

18-year-old Billie Eilish wears a custom-made Gucci suit. The young artist also walked away with 5 awards, including a sweep of the top four categories: Song of the Year, Best New Artist, Album of the Year, and Record of the Year. Photo Credit: Forbes

To begin, popular teen artist Billie Eilish’s green Gucci suit caught our eyes immediately, yet we couldn’t help but see similarities between her outfit and the crocodile from Peter Pan-or a very fashionable robber. 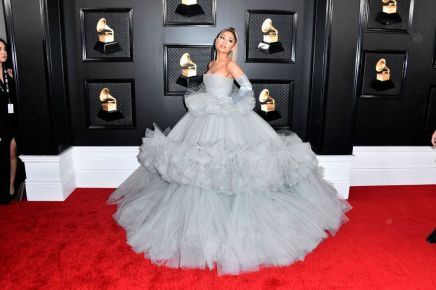 While Grande didn’t win any awards at this years show, she was nominated for Record of the Year with her song, “7 Rings,” and Album of the year with her album, “Thank U, Next”. She is wearing a custom-made Giambattista Valli dress. Photo Credit: Orange County Register

Another outfit that received massive backlash on social media was Ariana Grande’s storm-cloud inspired, loofah-esque “dress” that bears an uncanny resemblance to the chandelier in my grandmother’s living room. While the dress itself fits well and suited Grande perfectly, there was no doubt that it was missing something (possibly an outer layer).

Tyler, the Creator is wearing a Golf Le Fleur suit, a company that he has a collection with. Tyler won Best Rap Album for his newest project, “IGOR”. Photo Credit: 10 Magazine

One look that we did love was Tyler the Creator’s bellhop outfit, which we interpreted as an ode to the legendary character Esteban Julio Ricardo Montoya de la Rosa Ramírez of the Disney Channel program The Suite Life of Zack and Cody. The shade of pink, however, couldn’t help but make us think that he accidentally did his laundry at Elle Woods’ house.

Falling somewhere between the crossroads of adventurous and sinful was Lil Nas X’s obvious cosplay of the popular children’s cartoon character Pink Panther. One thing’s for certain, he won’t be hard to spot on the Old Town Road.

After being launched into the spotlight this year with her hit song, “Truth Hurts,” Lizzo has rocked many red carpet looks. At the 2020 Grammys she looked stunning in a white Versace gown. Lizzo was nominated for Album of the Year, Song of the Year, Best New Artist, Record of the Year, and Best R&B Performance. She ended up walking away from the awards winning Best Pop Solo Performance, Best Urban Contemporary Album, and Best Traditional R&B Performance. Photo Credit: Fashionista.com

Lizzo decided to go down a different route, opting for a golden age-inspired white dress, accompanied by a stole. Her outfit was, without a doubt, the only one that made us smile, instead of cry-laugh at its sight. She took a DNA test and she knows that she’s 100% rocking this red carpet look.

While Porter wasn’t nominated for anything this year, he looked absolutely fabulous in his custom-made blue jumpsuit from Baja East. Photo Credit: TheeBillyPorter on Twitter

Nonetheless, the best outfit of the evening award undoubtedly goes to Billy Porter for his sky blue, glittery full-length bodysuit, accompanied by a blazer of the same material, metallic silver cowboy boots, and a motorized sparkle chain hat. His outfit made us wonder if he accidentally strayed into the lighting section at Home Depot for inspiration.

At the very least, the 2020 Grammys have taught us something: it’s okay to take fashion risks, as long as those risks aren’t blatant eyesores. Unfortunately for the Grammys, most of these outfits definitely were.