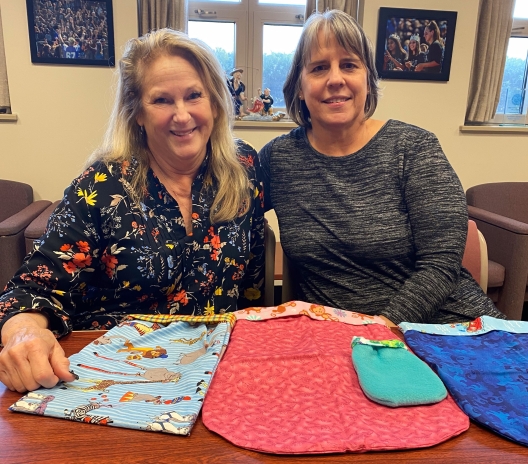 Teachers Anita Stewart and Lorraine Sieben sit with some of the many pouches they have made for orphaned wildlife in Australia. Photo credit: Emma Gampper

Australia has been ravaged by devastating wildfires since July 2019, destroying the homes of both people and animals. Many Americans are hopeless and wondering what they can do to help. After hearing about the displaced wildlife in Australia, two North teachers, Ms. Anita Stewart and Ms. Lorraine Sieben have taken matters into their own hands, literally.  The two teachers, along with other faculty volunteers and a similar group in Maryland, are making pouches for the orphaned animals and sending them to Australia. “We’re doing this independently. I got an email from a group in Australia and got in touch with the organizers who sent me files with all of the sewing patterns and the things they needed,” said Stewart.

According to CNN, half a billion animals have been displaced as a result of the fires. But sewing groups around the world have answered the call to sew and donate pouches for the orphaned marsupials. “My favorite thing is how we’ve all come together as a group to help a country that is burning and whose animals are suffering. We’re all doing our part to show the world that we are caring,” said Stewart.

One of the orphaned marsupials rests in a pouch made by one of the sewing groups. Image provided by Anita Stewart

The pouches will be used as temporary habitats for many of the animals affected by the crisis. Many of the victims  are orphaned baby marsupials who spend much of their developmental years in their mother’s pouches. Their mother’s pouches provide the baby animals a place where they are able to sleep and feel safe. The man-made pouches consist of a thin outer layer with an inner fleece layer, to keep the animals at an optimal temperature. The pouches also come in different sizes for different animals such as kangaroos, wombats, koalas, and other small marsupials like pygmy possums. “Once you learn the patterns it’s really fast. I made 35 pouches one Saturday; I just devoted the whole day to sewing,” said Stewart. Some animals like kangaroos sleep while hanging vertically, so some of these pouches are also designed to accommodate a string so the bag can hang and provide a comfortable place for the infant kangaroos to sleep.

Australia recently put out a thank you letter, encouraging people to donate pouches and nests to their own local wildlife preservation centers. The pouches have saved countless animals and the people of Australia are thankful; however, there is now an even greater need for monetary donations to provide the animals with medical supplies and to airdrop food into the habitats that are still standing.  If you are interested in donating, Stewart cautions that you donate to a known and reliable charity or organization to ensure that the money reaches the animals in need.

Australia is inviting overseas donors to visit the following link to make their donations, it is the official international donations page for the ARC (Animal Rescue Crafters Guild) and the TRC Bushfire Support Program. If you are interested, you can donate at https://mkc.org.au/donations/arcworld.