It’s common knowledge that a math test assesses one’s problem-solving skills and mastery of number theory.  But the test set forth on the sports field is a completely different kind […]

It’s common knowledge that a math test assesses one’s problem-solving skills and mastery of number theory.  But the test set forth on the sports field is a completely different kind of challenge: one in which  passion has a funny way of trumping logic.  The intangible can often nullify the visible, and a drive to win can overcome any amount of talent.  For senior Leigh Calotta and sophomore Vincenzo Pugliese, the blood, sweat and tears they poured into their athletics were rewarded with a coveted honor.

Calotta and Pugilese were named to the Colonial Valley Conference first team in field hockey and soccer, respectively, a regional honor bestowed u 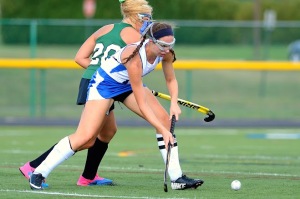 pon the top athletes in each sport.  For Calotta, the award came as an unexpected surprise.  “I never even thought about being recognized individually,” Calotta said.  “I even forgot they made the teams at the end of the season!”

A team captain, Calotta played a huge role in controlling the Knights’ attack from center midfield.  Although she recorded only one goal and assist this year, Calotta was instrumental to the Knights’ 11-9-1 record.  “She has great skills,” senior field hockey player Kylie Muhall said.  “Anyone on the field can look to her to know where they should be or what they should be doing.”   Even without off-the-chart statistics, Calotta influenced games with a tireless motor and a will to win.  “I think it says a lot about my dedication to the sport.  During the season I stayed very focused on the team, our record, and team goals,” Calotta said. 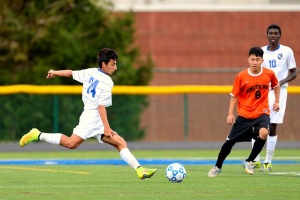 Similarly, Pugliese attributes his recognition to the time he has dedicated to soccer.  Earning the award as a sophomore is a massive testament to Pugliese’s whole-hearted investment to the sport:  “The driving forces to my award was just knowing that if I worked hard and always gave 100 percent in practices and games, I would be ever so lucky to achieve this,” Pugliese said.

As one of the team’s main attacking midfielders, Pugliese—like Calotta—controls the North attack as a playmaker.  “He is a high-energy player who gave a lot to our attack.  His pace and work ethic were incredibly useful,” forward Shiva Gongalla, a senior, said.  Pugliese is the team’s main corner kick and free kick taker, allowing him to create chances as well as convert them.  This season, he scored eight goals and recorded two assists.

Both these players aced their on-field tests through love for the game and the skill and work-rate it takes to play a starring role at the varsity level.

Posted on November 21, 2014 0 By Vansh Bansal Sports Posted in Sports