Heads rolling off moving bodies with one slash of the sword.  Blood seeping out from cavities spotting the body.  Horses wailing in pain, brutally forced to continue a painstaking endeavor.  […]

Heads rolling off moving bodies with one slash of the sword.  Blood seeping out from cavities spotting the body.  Horses wailing in pain, brutally forced to continue a painstaking endeavor.  Cheers.  Whistles.  Standing ovations.  The Roman gladiator games were some of the most controversial practices of ancient times: many claimed to frown upon the ruthless nature of the sport.

Over 2,000 years later, American society has fostered its own “gladiator games.”  With the recent flurry of football players scrutinized by the media for domestic abuse, the National Football League has fallen into an abyss of negativity.  Even with the legal accusations and horrifying discoveries, however, the NFL will likely continue to be one of the biggest media powerhouses in the country.

People apply moral values to personal situations and facets of everyday life.  Even if the public feels they would have handled the Ray Rice and Adrian Peterson stories differently, they need not stop tuning in on Sundays, buying tickets, or purchasing NFL apparel.  The NFL does not promote these actions, nor will it take such crimes lightly with the newly-proposed player conduct committee being put in place.  The NFL is trying its best to move past these issues, and fans shouldn’t be judged for doing the same.

Despite the shocking, gruesome video clips that have surfaced depicting former Ravens running back Ray Rice’s attack on his wife, Ravens fans have stuck by their much-maligned football team.  Before the suspension was imposed, Ray Rice arrived to training camp practice greeted with cheers and standing ovations.  Even after the suspension, a sold-out crowd watched from the stands as the Ravens routed the Pittsburgh Steelers.  CBS announced that television ratings for the Thursday night game were 215 percent higher than the normal primetime numbers.  In fact, the first Thursday night game of the year netted a 108 percent rating increase from last year’s TNF opener. 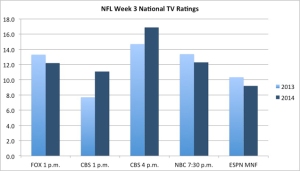 Fans are still tuning into America’s game, no matter who’s   playing.  The NFL separated itself from the culprits of domestic abuse, indefinitely suspending both Rice and Peterson.  No one should be forced to boycott the game he or she loves simply because of moral issues that are now in the past.

Subsequently, sponsorships and endorsers should eventually migrate back to the money-making machine they recently fled.  According to The Hollywood Reporter, sponsors have asked that their ads be removed from Baltimore Ravens and Minnesota Vikings telecasts.  However, this breakup may not last long.  Having signed a new eight-year, $1.5 billion deal with DirecTV, the NFL will always hold leverage in corporate partnership deals.  Even if sponsors try to avoid Ravens and Vikings games, what will happen when the 5-2 Ravens play their first playoff game this January, an event sure to bring in a colossal TV audience?  Advertisers will jump headfirst into the NFL’s pool of money.

Furthermore, the quality of football has yet to decline for teams affected by these incidents, despite the off-field controversy.  The Baltimore Ravens have amassed a 5-2 record over four games, currently riding a three-game win streak.  The Ravens have seamlessly found a way to replace an All-Pro running back, highlighting another perfection in the NFL system: in a league where 22 players start for any given team, the loss of one key player will never diminish the quality of play.  Thus, teams will continue winning games with or without lost players and will separate the player in question from the team and ultimately, the league.  The NFL will eject members that could harm the league’s image, as they did with Peterson and Rice, shedding dead weight on its path to the top of the media world.